SOMEWHERE UNDER THE SKY 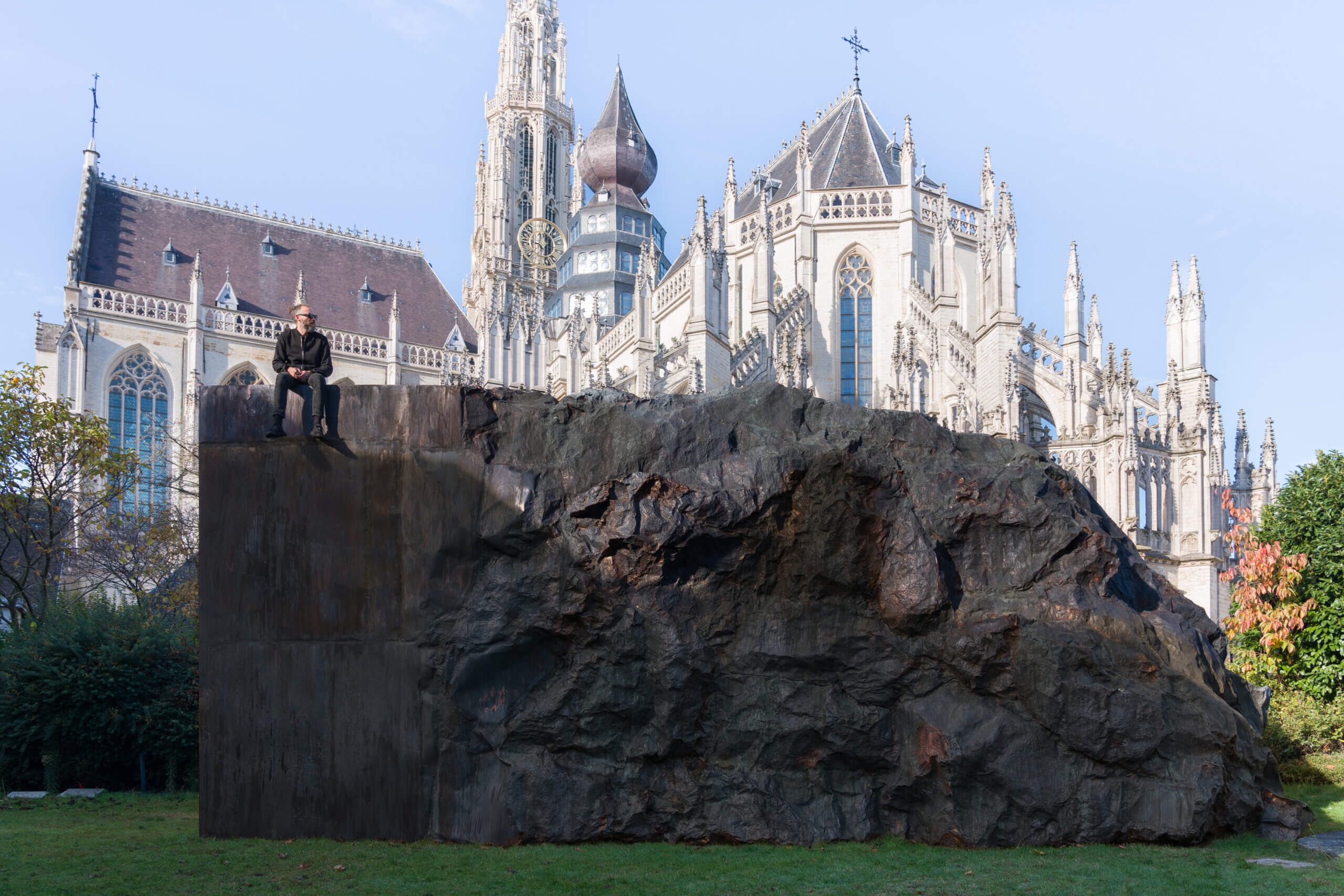 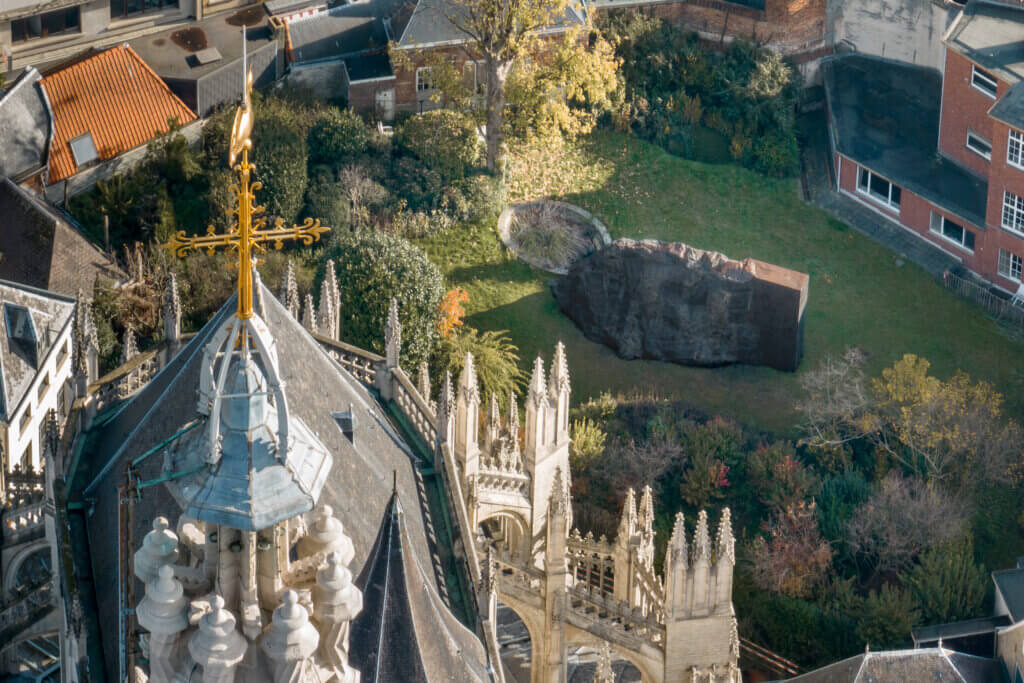 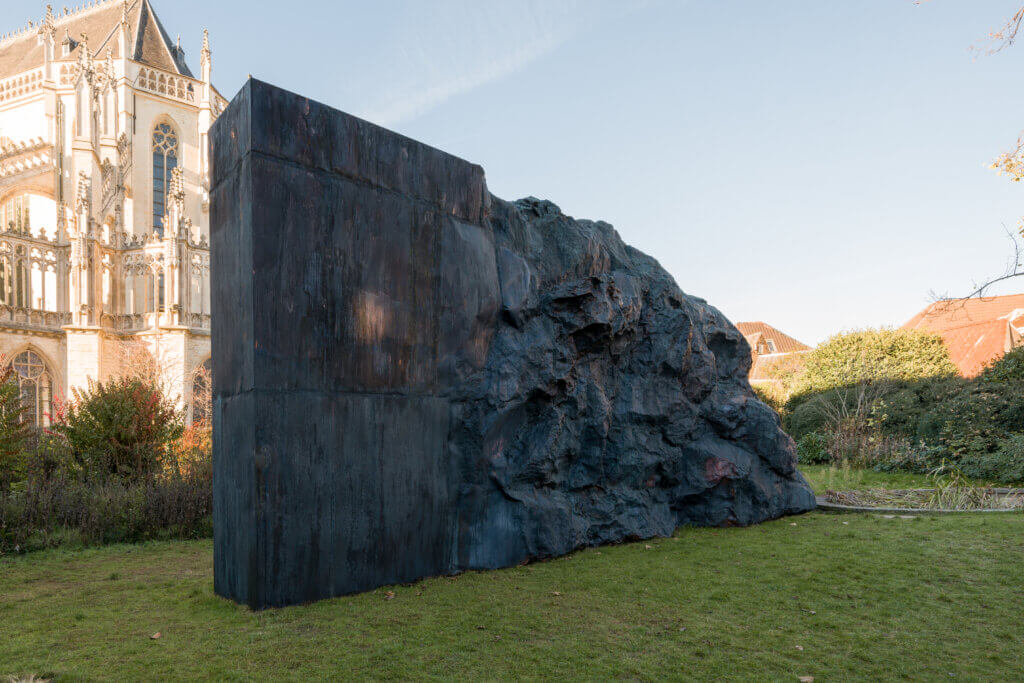 The fiction, non-fiction and science-fiction of objects that come crashing in from a sky that might not just be, let alone have, a ceiling, is what provides the copper-centric sculptures from Marius Ritiu’s ongoing Sisyphus series with its proper myth. ‘Somewhere under the sky’, is the latest and eighth installment of these stone-from-space look-a-likes, and was assigned a spot in the garden of Antwerp’s cathedral.

It is not just the sculpture itself – which this time looks less like a compressed asteroid than a cartoon of a Serra struck by lightning – that adds to the vocabularium of the former works in the series, but also the site specifically and the inescapable church in contrast that deepens Ritiu’s exploration of scale’s suspense. Technically the inverse of the “overview effect” – the apparently life-changing experience of witnessing the earth from above,
so small among at-least-greater space – Gothic churches, of which Antwerp’s cathedral is a perfect sample, were built to convey this exact sense of “being taken higher”, of squeezing individually insignificant lives in God’s greater plan. Your eyes following the tower forever-up meant you disappearing with it. The incredible and stone-defying detailing of the cathedral’s exterior is by no means a match with Ritiu’s belief in the motion-blur of Doing It Yourself. Rather than perfect artistry, here’s artistry with perfect ends to it.

Dedicating a practice, you could say, to a boredom of borders, the artistic paradox Ritiu seems to deal with is that it takes gigantesque blockages, borderline invasions in cramped galleries or crowded public spaces, to show that we are little, and art is little, and perhaps all is relative. That seen from infinite spots, we don’t make sense, art doesn’t make sense and perhaps nothing remains. I guess the relativity of it all does the vice-versa here justice. And to think somewhere in all this nullifying still stands the Sisyphus-y promise that there will always be yet another stone ready to pop out of nowhere. (Text by N.V.)

Made possible with the support of the Flemish Department Cultuur, Jeugd & Media, DMW Gallery, and Geukens & DeVil.